Home > News > You Can Now Mine Monero for Charity

There are now more ways than one to donate to charity without actually sending money. Thanks to UNICEF, you can help children around the world by simply lending your computing power to mine Monero.

This ingenious way helps you contribute for good causes simply by visiting www.hopepage.com. While here, you can set the computing power you are willing to donate (up to a maximum of 80 per cent) and let your computer do the work. There are no downloads needed. It couldn’t get any easier. The more time you spend on the site, the more Monero you mine and the more children you help. 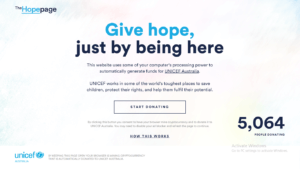 According to UNICEF, proceeds will go towards critical supplies such as safe water, vaccines and “therapeutic food.” At least 5000 people have already donated according to the page.

The donations will be directed to UNICEF’s Australia branch.

Hopepage as the project is also called uses a browser-based mining tool developed by Coinhive. The JavaScript miner can be embedded on a website and was initially conceived as an alternative to ads.

Websites such as Salon are already giving this option to its readers.

Monero, a privacy focussed cryptocurrency is mined by calculating hash rates. Unlike Bitcoin and other cryptocurrencies, its mining is specifically designed to be done on PC’s, eliminating concerns about centralisation.

Monero is one of the most sought after coins due to the anonymity it gives users. This is done through shuffling identifying user information.

The project is just an example of how cryptomining can be used positively. Cryptojackings, where hackers use computer resources without the owner’s knowledge, have spiked sharply in the past one year. A recent report by Symantec shows that it has overtaken ransomware attacks showing just how lucrative it has become.

Cryptomining software requires significant amounts of power and can have adverse effects on a PC’s battery life.

2 May, 2018
We use cookies to personalise content & ads, provide social media features and offer you a better experience. By continuing to browse the site or clicking "OK, Thanks" you are consenting to the use of cookies on this website.