The cryptocurrency market recovered slightly yesterday, and that could allow EOS to rally higher soon

The cryptocurrency market has recovered slightly following the losses of the previous day. Bitcoin climbed past the $38,000 mark yesterday while Ether rose above the $2,600 level. EOS rose by over 2% yesterday, following a 0.02% decline on Tuesday.

EOS had a mixed start to the trading market yesterday, falling to a late morning intraday low of $3.92 before it embarked on a rally. After establishing a strong support level at $3.89, EOS rallied to a late intraday high of $4.15. However, it has since dropped to the $4 level and has stayed there over the past few hours.

The cryptocurrency market has been experiencing mixed performances in recent weeks. The outlook from some analysts is still positive despite the current market situation.

The EOS/USD 4-hour chart is currently in a bullish zone. To surpass the first major resistance level at $4.21, EOS would need to steer clear of the $4.06 pivot. Further support from the broader market would be required for EOS to surpass Wednesday’s high of $4.15. 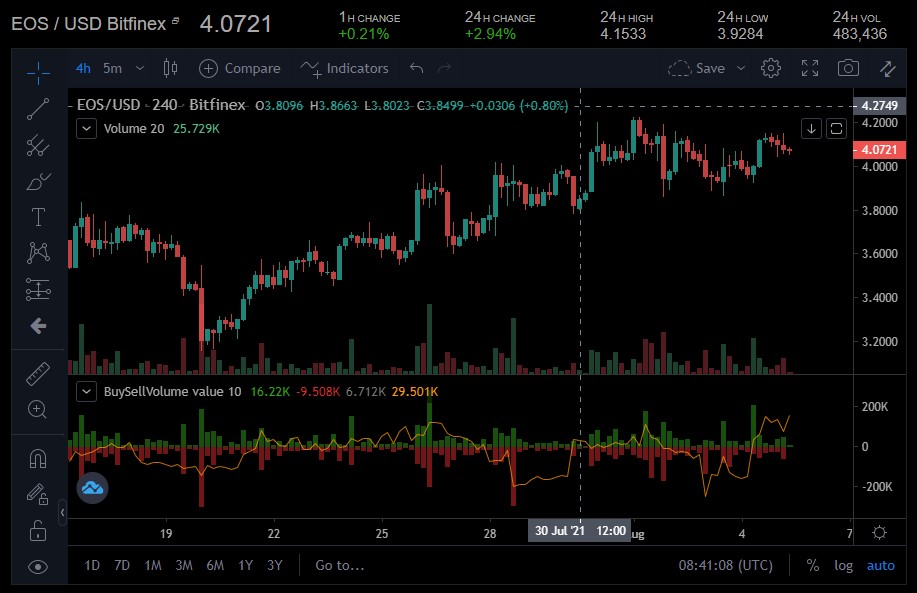 The MACD line is in a bullish zone while the RSI currently stands above 50, indicating that more investors are buying EOS.

However, a decline below the $4.06 pivot would bring the first major support level at $3.97 into play. The EOS bulls should be able to defend the sub-$3.90 levels unless there is an extended market sell-off. Currently, the second major support level sits at $3.83.