NEM Guide | Learn Everything About XEM

Nem (XEM)
...
24H Change
...
7 DAYS CHANGE
...
Market Cap
...
Author: Eleonora Di Felice
The one thing that keeps all cryptocurrencies in one basket is the algorithms they all employ at their back-ends. While Bitcoin uses PoW (Proof of Work), Ethereum uses ethash and NEM uses PoI (Proof of Importance). Proof of Importance algorithm is an important thing to understand, to learn how NEM functions. When a user tries to send or receives coins, his transactions-list is according to the priority, and many factors decide the importance of each transaction that has to happen on the network. Some of them are - the number of coins he has, number he is trying to move and the number of frequent transactions he has made in the past. There are many cryptocurrencies in the world right now, and for a new investor, it is as confusing as entering the fish market for the first time. Being clueless and naive is comprehended. Hence, before investing in any cryptocurrency, the investors must do a thorough research at their end.

About NEM Coin (XEM) and its History

NEM was initially planned, not as a separate cryptocurrency, but a hard fork on the network of NXT coin. Originally, some pseudonym user from Bitcoin talk-forum started NEM coin. Right on that forum, the discussions started and the coin was formed. With an open support from community's side, NEM was conceived. Just like Ethereum, NEM is also a platform based upon simple Java & JavaScript. To fuel the NEM platform, NEM Coin was introduced, also known as XEM.  NEM boasts of conducting all kinds of decentralized transactions securely and quickly. The wait-time is one of the most crucial concerns of the cryptocurrency community, as the number of transactions are increasing on the network by each passing day. Bitcoin's long wait-time has frustrated many users, who decide to move to other cryptocurrencies instead. NEM and other alt-coins have a high anticipation in terms of wait-time, transaction fees and other small things that have begun to matter now, because of the cut-throat competition.

Harvesting instead of Mining

As traditional cryptocurrencies like Bitcoin require mining, NEM requires harvesting. It functions on the feature that the user must have 10,000 vested XEM coins in his NEM Wallet, that he can earn using the processing power of his computer, by running super-nodes.

What makes NEM popular enough to feature among top cryptocurrencies of the world?

NEM Coin is said to follow the path of Ripple, as it rose to heights in just one year. Only in 2017, NEM coin's price hike was more than 17,000%. Another factor to consider in NEM is its stronghold and solid approach in smaller countries, than targeting big markets. NEM cryptocurrency focuses on small businesses and enterprises, because of which its target audience has always been the communities that did not hear about Bitcoin or any other cryptocurrency at all. With such a crowd, it becomes easier to emerge as the first player. Rather than compete in an already bloody market of blockchain based currencies that have higher popularity in the global market. 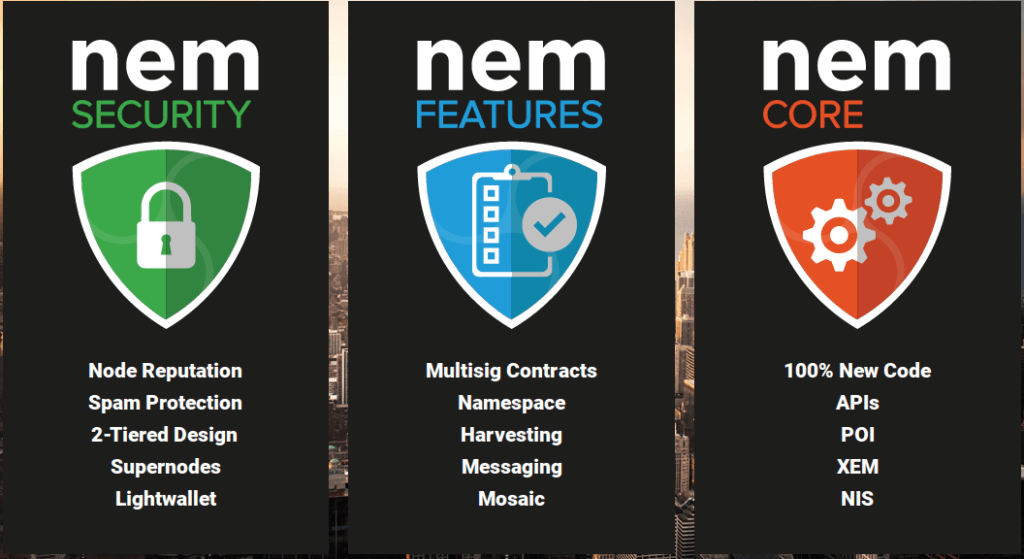 Additionally, NEM is not a simple blockchain platform - it is a smart-asset blockchain, that allows users to customize their blockchain platform and craft their own smart contracts, where they can store their digital assets or other cryptocurrencies. South Korea and its popular cryptocurrency exchange OKEx is also highly responsible in making NEM reach the level it is at today. There are many social media links and groups like - NEM Reddit, NEM Telegram, NEM Github etc. They talk about the latest innovations happening in the NEM Coin (XEM) and its network.

NEM cryptocurrency was worth $0.0002 in 2015, and now its value, as of early 2018, is around $1.12, which is a remarkable hike for the early investors. NEM Coin Price is the talk of the world right now because of its substantial growth over time. As they are working on their next generation blockchain solutions, the price might also go up till $2 in 2018, as the experts suggest. Anyways, the price of any cryptocurrency or a stock, also highly depend upon demand and supply. And NEM will definitely gain popularity in coming time because of its approach and growth plan. If your country allows trading in cryptocurrencies, there might be many local exchanges where you can search for NEM Coin (XEM). Plus if they support it, you can buy that directly using your bank account details or your debit/credit card. And if there is no local exchange that supports cryptocurrency. You can always buy NEM Coin from international exchanges like Coinbase, Bittrex, Binance, Bitfinex etc. where you just need to register and make an account like a social media.

It is easy to store NEM Coin (XEM) in either the online exchanges where you make the purchase, or you can store it in any offline NEM Coin wallet. Offline NEM Wallets also provides a robust support to safeguard your NEM coins for future. They provide you a private key to access your account, when and as you desire. Storing any cryptocurrency online on exchanges is not safe. As there are various risk factors associated with them, and one of the major ones is hacking. NEM also provides its in-house wallet called NEM Nano Wallet, that can be downloaded from their official website. The Nano NEM Wallet is easy to use, as it has a user friendly interface. It presents the users with three choices of wallet - simple wallet, brain wallet and private key wallet. Simple wallet is best for new users and first-time investors. Hardware wallets like Ledger S Nano, Trezor and KeepKey also support NEM Cryptocurrency. They also allow users to store their cryptocurrency, just like you store your movies on your hard drive.

NEM Cryptocurrency (XEM), with its flexible operations and interoperability, has a long way to go. This is certainly not the end for cryptocurrencies or the blockchain platforms. And once a cryptocurrency has the trust of the world, it can easily conquer the world in coming years. Although every cryptocurrency and its price depends heavily upon demand and supply, the developments on internal network also have a role to play.